Pastor at Trinity UCC since January 2001, and has led Trinity in becoming a “social action, social justice church.” He was a plaintiff in UCC v. Cooper that brought Marriage Equality to North Carolina. Nathan received his Master of Divinity with Religious Education Degree from Southeastern Seminary in 1990. He served churches as Minister with Youth and Children for 10 years before being ordained in the United Church of Christ in 1993. He has been in pastoral ministry for 25 years. Rev.Nathan@commachurch.com to email or call 704-224-1653.

The Rev. Ladale Benson is an ordained Baptist minister, who is now pursuing ordination with the UCC. He engages the perspectives of marginalized bodies and life for his theological development and praxis. He is an activist, hospital chaplain, and Ph.D. student at California Institute of Integral Studies in the Women’s Spirituality Program. His academic work is centered in imagining possibilities of a healed manhood/masculinity that does not function within domination practices.  He enjoys going to the park with his three-year-old son, reading, writing, and traveling internationally.
Rev. Benson has a B.A. from Greensboro College in Liberal Studies/Religion (2012). He also received his M.Div. from Hood Theological Seminary (2016) and Th.M. (Master of Theology) from Duke University Divinity School (2017). Rev.Ladale@commachurch.com to email or call 704-886-8196.

Danielle Stingel has served our church as Administrative Assistant since 2012. Trinity Office Hours are Mondays 9am-Noon, and Tuesday-Wednesday-Thursday 9:30am-1:30pm.  Danielle@commachurch.com to email or call 704-782-1024. 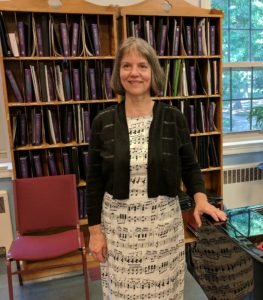 Theresa Woody served Trinity as Music Director from October 2000 until December 2006. Trinity welcomed her back in that role in 2017, and she officially began as Music Director on January 1, 2018. She holds a BA in Music (specializing in Piano Pedagogy) from UNC-Ch. She has taught piano for the past 35 years at South Street Piano Studio “teaching Beethoven the way it was meant to be taught” in Davidson, NC. She has served a variety of churches as Music Director for nearly 20 years. You can also hear her occasionally on WDAV 89.9fm hosting Choral Showcase. She brings experience leading choirs and presenting a wide variety of music across music genres. Theresa.Woody@gmail.com to email or call 704-453-1703.